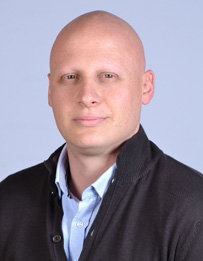 Andrea Vesco received the M.Sc. degree in Telecommunication Engineering and the Ph.D. in Computer and System Engineering from the Politecnico di Torino in 2003 and 2009 respectively. After one year of post-doc with the Control and Computer Engineering Department as a member of the Computer Networks Group at the Politecnico di Torino, he joined the Networking Lab at the Istituto Superiore Mario Boella (ISMB) in 2010. His research interests were on Quality-of-Service (QoS) over packet switched networks and wireless access networks. Moreover he carried out research activities on QoS over Network-on-Chip (NoC) in collaboration with the System-Level Design Group at the Columbia University of the city of New York.
After ten years of experience and several publications in the networking field, he had the opportunity to focus the researches on the Smart City subject in 2013. His research effort is currently spent on the role of ICTs for the Sustainable Development of Smart Cities. He serves as ISMB representative within ERTICO ITS EUROPE from 2016.
Throughout his career he has held a teaching role at Politecnico di Torino as adjunct professor.